By closing the banner with the [X] button you don't allow the use of profiling cookies. Therefore, we will not be able to personalize your browsing experience, nor offering you products or services based on your preferences and online behaviors.

Intesa Sanpaolo was created on January 1, 2007, through the merger of two leading Italian banking groups, Banca Intesa and Sanpaolo IMI.

The first steps toward the merger process were taken on August 26, 2006, when the Boards of Directors of the two banks approved the guidelines for a merger plan. The plan was then agreed by the Boards on October 12, 2006,  and ratified by the Extraordinary Shareholders' Meetings of the two banks on December 1 of the same year.

Intesa Sanpaolo acquired control of UBI Banca on August 5, 2020 and merged it by incorporation on April 12, 2021.

Banca Intesa was formed in 1998 from the merger of Cariplo and Banco Ambrosiano Veneto. In 1999, Banca Commerciale Italiana (BCI) joined the Intesa Group. With the subsequent merger of BCI into Banca Intesa (May 2001), the group took the name IntesaBci. In December 2002 the Shareholders' Meeting resolved the change of the company name to Banca Intesa, effective as of January 1, 2003.

May 21
Definition of the Group's new federal organisation

June 1
Presentation of the industrial plan to the market

April 11
Presentation of the new divisional model to the market

November 17
New Board of Directors of Banca Intesa appointed

December 19
The operating management of the Group appointed

Sanpaolo IMI was formed in 1998 from the merger of Istituto Bancario San Paolo di Torino and IMI (Istituto Mobiliare Italiano). These two banks were highly complementary: Istituto Bancario San Paolo di Torino was specialised in retail lending, IMI, a public entity founded in 1931 to support the reconstruction of the national industrial system, was a leading business and investment bank.

Merger of Istituto Bancario San Paolo di Torino (which has its roots in the Monte di Pietà founded in Turin in 1563), and IMI, and the renaming of the entity as Sanpaolo IMI.

Sanpaolo IMI continued to grow nationally, acquiring Banco di Napoli (that was founded as long ago as 1539 as a charitable institution focussed on helping the needy), entering into the share capital of Cassa dei Risparmi di Forlì e della Romagna and setting up strategic alliances with leading Italian and foreign banking institutions.

Integration of all of the Group's Commercial Banks, adopting the same organisational and business model and the same IT platform, was completed.

The project for the new Insurance pole is launched and in October the strategic plan for the three-year period 2006-2008 is presented.

UBI Banca was formed on April 1, 2007 from the merger of the BPU Banca Group and the Banca Lombarda e Piemontese Group, which were established following a series of mergers. 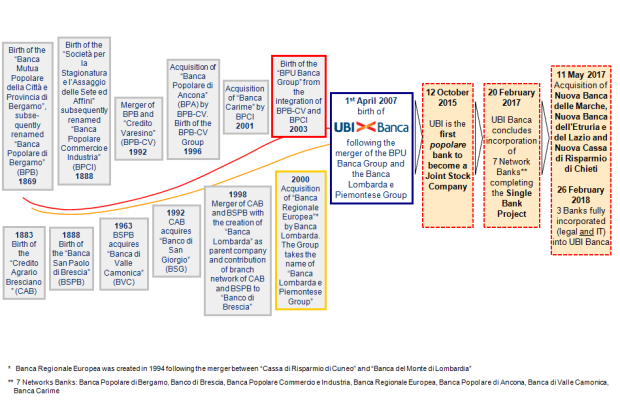